August the 5th will be a very special day for all folks passionate about custom build computers. Ask us why and our response will be simple – the new AMD Ryzen 5000G generation of desktop processors will be released on that day. Given the untenable state of today’s graphic card market due to supply shortages, AMD’s new release would be welcomed with open arms for us gamers and serve as AMD’s “non-X” chips that traditionally offer more attractive price points at a given core count.

AMD has two types of processors:

CPU: Processors without integrated graphics, which are often targeted for higher performance markets with a chiplet design

APU: Processors with integrated graphics which use higher powered versions of the equivalent mobile monolithic silicon.

AMD gives the latter easily identifiable product names because they all end in a G, for graphics.

These APU processors are built on the 7 nm “Cezanne” silicon, featuring up to 8 CPU cores based on the “Zen 3” microarchitecture, an iGPU based on the “Vega” graphics architecture with up to 8 compute units, but updated display- and media-acceleration engines; 512 KB of L2 cache per core, and 16 MB of L3 cache that’s shared between all eight cores. Built in the Socket AM4 package, the processors are compatible with AMD 500-series chipset motherboards. The chips feature PCI-Express Gen 3 downstream I/O – sounds sexy doesn’t it?

Both the 5600G and 5700G were tested in CPU-z and Geekbench, performing admirably against other products from AMD and Intel. WCCFTech reports that the Core i9-11900K was defeated by the Ryzen 7 5700G in multi-threaded performance, and the Ryzen 5 5600G proved to be faster than the Core i7-10700K in single-threaded performance despite a lower clock speed.

There is also the 5300G, but this is for OEM markets only.

*PCIe lanes on the SoC are listed in GFX+Chipset+Storage

As with all Ryzen 5000 processors, Cezanne fully supports overclocking, which includes memory, graphics and CPU cores. AMD also says that the auto-overclocking Precision Boost Overdrive (PBO) and adaptive offset qualities are supported too. The Cezanne chips drop into the same motherboards as the current-gen Ryzen 5000 processors, so X570, X470, B550 and B450 are all supported. As with the other Ryzen models, memory support weighs in at DDR4-3200, though that does vary by DIMM population rules. 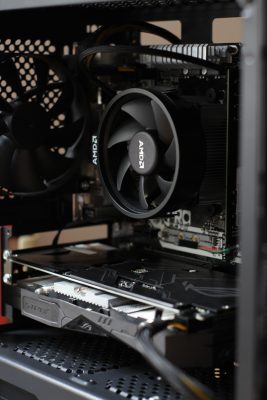 Now integrated graphics is a huge appeal for APUs and AMD continues to pair its APUs with the Vega graphics architecture, just as it did with the 4000-series APUs. AMD revised the architecture for its last go-round — the improved RX Vega graphics delivered up to 60 percent more performance per compute unit (CU) than its predecessors, this meant more graphics performance from fewer CU. We do not know if AMD has made a similar adjustment this time around, but we’re sure to learn more as we get closer to launch.

But lets see how this new generation will fare against the X Version of the 5000 Series from AMD:

However, there are a number of disparities:

The 5600X CPU has PCIe 4.0 rather than PCIe 3.0, as well as double the cache. The price difference puts the 5600X as tad bit more expensive, but likely still the processor of choice for anyone wanting a fast discrete graphics card system. AMD’s Ryzen 5 3600 is the only real relevant contender in this price range (to 5600G), and it launched two years ago with the Zen 2 architecture.

If we go up to the 8-core parts, then that disparity changes a little.

Base frequency is the same for both but the turbo is higher on the 5800X.

Well whatever your decision may be, the new APU series will provide another choice for PC builders and upgraders hurting for affordable graphics performance and yes you guessed it, ALVA PC will have these in stock at a lower price than any competitor on the market!

Response time: 44 minutes or under

We use cookies on our website to give you the most relevant experience by remembering your preferences and repeat visits. By clicking “Accept”, you consent to the use of ALL the cookies.
Cookie settingsACCEPT
Manage consent

This website uses cookies to improve your experience while you navigate through the website. Out of these, the cookies that are categorized as necessary are stored on your browser as they are essential for the working of basic functionalities of the website. We also use third-party cookies that help us analyze and understand how you use this website. These cookies will be stored in your browser only with your consent. You also have the option to opt-out of these cookies. But opting out of some of these cookies may affect your browsing experience.
Necessary Always Enabled
Necessary cookies are absolutely essential for the website to function properly. These cookies ensure basic functionalities and security features of the website, anonymously.
Functional
Functional cookies help to perform certain functionalities like sharing the content of the website on social media platforms, collect feedbacks, and other third-party features.
Performance
Performance cookies are used to understand and analyze the key performance indexes of the website which helps in delivering a better user experience for the visitors.
Analytics
Analytical cookies are used to understand how visitors interact with the website. These cookies help provide information on metrics the number of visitors, bounce rate, traffic source, etc.
Advertisement
Advertisement cookies are used to provide visitors with relevant ads and marketing campaigns. These cookies track visitors across websites and collect information to provide customized ads.
Others
Other uncategorized cookies are those that are being analyzed and have not been classified into a category as yet.
SAVE & ACCEPT